Last Friday morning I walked out of the Neonatal Intensive Care Unit, emptied my locker and said goodbye to my co-workers at the hospital. I am now officially a full time athlete!

It has certainly been an exciting week, for the first time in 22 years I won’t be beginning September as a student. I’ve always associated September with a return to school, a return to a more structured schedule, reconnecting with friends, and the start of the prime rock climbing season. This year September definitely carries the excitement of new beginnings but other than that everything is completely different. I’ll be traveling on an erratic schedule, won’t be doing any rock climbing, and won’t be seeing my friends very much.

This is how I used to spend my weekends in September.

September is definitely my favourite month, the cool crisp mornings fill with me with energy, no flying insects annoy me during training, and I’ve got my birthday this month as well – which I’ll be spending on snow this year if all goes well! 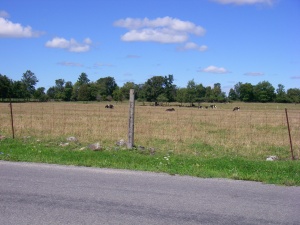 Rollerskiing through a pastoral landscape on a cool, crisp September morning – life is perfect!

Looking back, the last 13 months have been full of new experiences. I can now say that I’ve seen babies born, men and women die, I’ve seen people on the worst days of their lives, I’ve felt ribs crack as I performed CPR, I’ve rushed patients to the operating room, inserted arterial lines, intubated patients, and I’ve even had the chance to  transport a patient by airplane to a more specialized care centre. That’s the Hollywood version at least, not to say that these things didn’t happen, but they certainly didn’t happen every day during my work as a respiratory therapist.

Now that’s all gone (at least for the next few months) I probably won’t miss working the night shifts, I might miss the pay cheques as the ski season progresses, and I’ll definitely miss the people that I worked with.

I made another stop through Ottawa/Gatineau last weekend. I participated in the FUNd Run which was organised by three local skiers to help finance their season. They (and many volunteers) put a lot of work into the event and it really paid off – a fantastic run was had by all. I participated in the 6km race which was run as two laps of a 3km course. I pushed pretty hard on the first lap, and had my work cut out for me to ensure that I didn’t collapse on the 2nd lap. At one point I was within 10 seconds of the 2nd and 3rd place runners, but they were charging hard and I couldn’t catch them and ended up 4th of some 50 runners. Overall I was pleased with my performance but wish that I had had just a bit more steam on that 2nd lap to get on the podium! 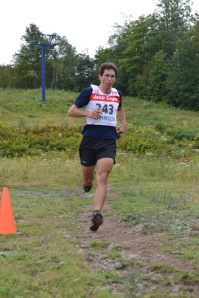 Exhaling as I try to stretch out my stride on a downhill section of the course.

At one point I considered announcing a scheme where I would try to train 1km for every visit to my website – in the last few weeks this has become completely unrealisable due to the increasing number of visits I’ve been having. Thank you all so much for reading and for sharing with your friends and family. May September bring you many exciting beginnings as well!