Summer is over, the equinox has passed, the days are getting shorter – and I went skiing on my birthday a few days ago! I’ve just finished a week of training in Oberhof, Germany. Oberhof is a town of about 1700 in the region of Thuringia – formerly in East Germany. The town seems to have perpetually terrible weather, but the locals and throngs of tourists seem make up for it with incredible enthousiasm for winter sports.

We had a six hour drive from the Czech Republic in a beautiful red Škoda Fabia.

Our accomodations for the week – hotels and food are expensive here but the sports infrastructure in the town make up for it. 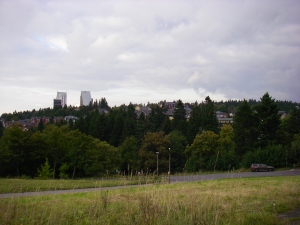 Essentially the best weather we  had all week in Oberhof.

The town is absolutely mad about biathlon and cross country skiing. They have at least two shooting ranges, an extensive network of beautiful rollerskiing trails, a bobsled track, an athletic track, a swimming pool, weight room, gymnasium and most importantly they recently built an indoor skiing facility which has snow year round. 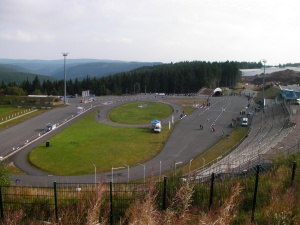 The biathlon stadium in Oberhof, the ski tunnel is the white building in the distance.

It’s been a big week for me, in terms of training and learning. I trained more this week than ever before.  We have been training at least twice a day, usually skiing for two hours in the morning working on technique, and rollersking, running or working on strength in the afternoon. On a few days I also did a quick 40 min workout before breakfast.

A quick bounding session before breakfast. 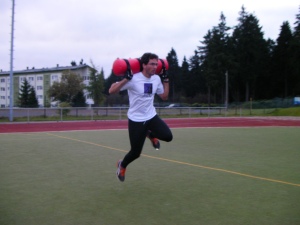 A brief moment of weightlessness during a pre-breakfast strength workout. 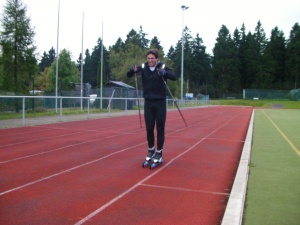 Rollerskiing is allowed on the local track – it mimics slow snow decently well.

Skiing in the “tunnel” has definitely been the highlight of this training block, and indeed the reason for training here. The “tunnel” isn’t in fact a tunnel, but a giant cooled building built on the surface to take advantake of the terrain to include a few hills. It is cooled to -4 celsius or so, and has snowmaking and grooming capabilities all indoors.

A partial view of the ski tunnel building from outside.

It’s good to be back on snow!

After my first day in the ski tunnel I started to catch a cold, so I’ve had to learn to be extremely dilligent about sleeping lots, staying warm, and changing into dry clothes right after a workout.

The ski tunnel has been an amazing opportunity to work on technique, but also to watch and learn from the professional skiers and biathletes from around the world who are training here. We have seen ski teams from France, Italy, Germany, Austria, Romania, Latvia and biathletes from Poland, the Czech Republic, Canada and Germany here this week. It’s not everyday that your skis are on the rack beside Vincent Vittoz’s! It can be fun to soak in the world class atmosphere, but then it’s important to refocus and work on your own skiing.

We spent some time with Kateřina Smutná (Czech born Austrian World Cup Skier) and her coach. I learned a lot about the dedication needed to perform at high level for years on end.

The German national team was conducting a series of tests this week which included a sprint race in the tunnel, a cross country run and a rollerski distance race. Watching the sprints was quite entertaining and made me look forward to the start of racing season.

Sprint starts in the tunnel.

Mid race action – best seats in the house! The second skier is the Czech biathlete Gabriela Soukalová who had a very successful season last year. 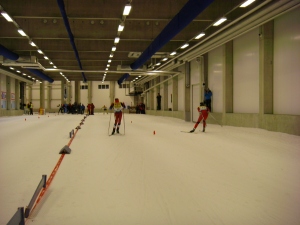 The tunnel is usually a bit dark, but they turned on more lights for the racing.

Lunging for the finish.

This week I’m back in the Czech Republic for more training, and then a cross country run on Saturday, followed by a classic rollerski race up Ještěd (again!) on Sunday.

A happy fall season to all!

One response to “Oberhof”