Perhaps it’s a special rock on a lakeshore, a hidden beach accessible only by kayak, a campsite reached after several days of canoeing and portaging, a small mountain lake, or maybe just a bench with a view in the park, a tree in the garden, or a plant on the windowsill. Hopefully each of us has found  beautiful places in nature. The place itself might not be that special, its significance could arise from the weather, dramatic light conditions, or the time of life or people that you’ve visited it with. It might be a familiar place or a new discovery. 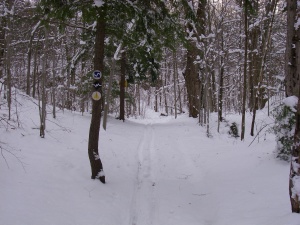 Skiing as it should be!

A few days ago I found one of these nice places where I least expected it.  Southern Ontario between Toronto and Ottawa generally lacks good skiing.  An early winter snowstorm brought us just enough snow to ski and I was able to explore the trails of the Triangle Cross Country Ski Club near Brockville. The skiing wasn’t great, but it was nice to get off the “hamster wheel” loops of snow that I’ve been skiing lately and explore someplace that I had never been. The uneven terrain, and hidden rocks beneath the snow forced me to keep alert, to balance well on each leg, and to be ready to make rapid adjustments to stay upright.

Where have you found a natural hidden gem lately? If it’s not too secret, feel free to share it in the comment section below, or (I never thought I’d say this) “tweet” me a picture! 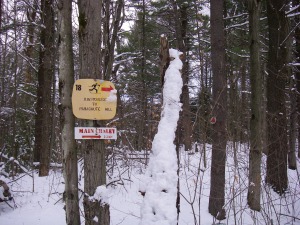 Glad to be on the trails. 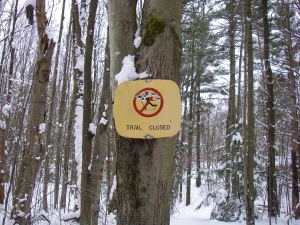 Oh dear, I’m not sure how sympathetic the local populace is to skiers. 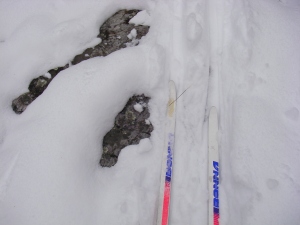 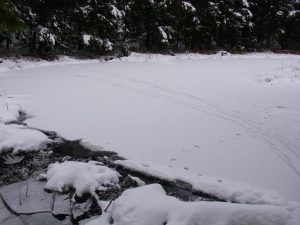 Would you cross 12mm of ice? I couldn’t find the courage (or foolhardiness?) to but someone before me did. 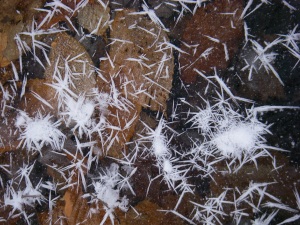 Remember to stop and smell the roses every once in a while.