This winter, the racing season in Ontario began with three days of racing at Highlands Nordic between Christmas and New Year’s Day. Unfortunately in the run up to these races my immune system decided that it too deserved a holiday break so I spent the 23rd to 26th dealing with a cold and sleeping as much as possible. 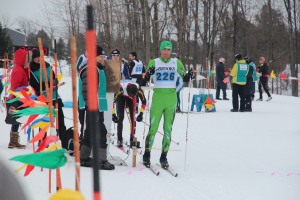 Back in the green race suit and ready to race!

Ontario cups are not FIS ranked events, but they still provided me with an excellent training opportunity and it is essential for me to keep gaining experience racing on different types of snow. I had to cut short a workout on the 27th because I was still not completely healthy so I didn’t know what to expect heading into racing. My coach and I considered skipping the races if we needed to, in order to stay healthy for upcoming FIS races. The first race of the O-Cup was a 3km skate “prologue”. Since I felt good during my warmup I decided to race. This turned out to be a good decision since I finished 2nd in the Senior Mens category. I wasn’t expecting to be on the podium so I missed the awards ceremony!

Typically a prologue is a short race on the first day of a “tour” of races and can offer bonus seconds, contribute to an overall ranking, allow you to win a good start position in a mass start or set the stage for a pursuit type competition. I was disapointed that the race organisers missed these opportunities so our “prologue” was really just another race (and one of an awkward length which I have never raced before).

On the 29th I raced a 10km classic race in difficult conditions. As temperatures warmed, ice from a recent bout of freezing rain fell off trees and into the track. This meant that there was both soft snow and hard ice to contend with. The race organisers also made a bewildering decision to close the race course to wax testing, so testing had to be done on lower trails where snow conditions were different than the race course. Fortunately Petr handed me some of the best prepared skis I have ever raced on and I had another decent race and managed to finish 2nd again. My family came to watch this race so I have more photographs to share than I normally would. 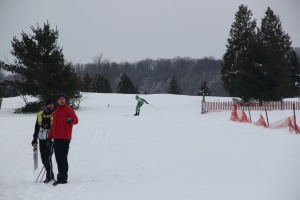 Double poling towards the stadium. 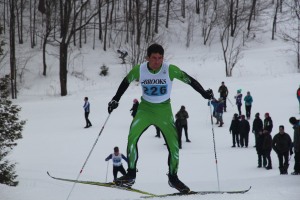 My herringbone still leaves something to be desired. 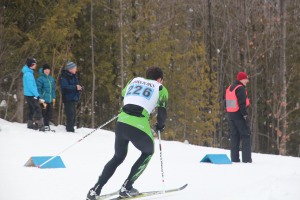 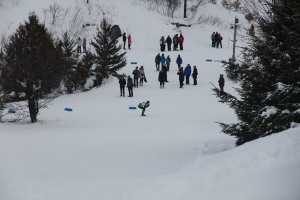 Tucking on a downhill. 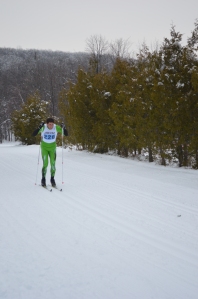 Heading for the finish. 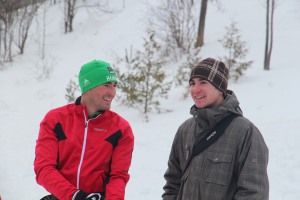 Reviewing the race with my brother. 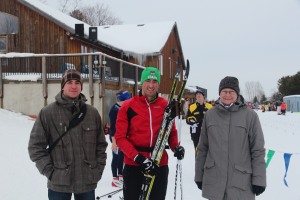 Three quarters of the Rossiter family.

The competitions finished with a 15km mass start skate race. A rapid change in the weather brought frigid temperatures and slow snow. Due to my mediocre points from last season I started in the fourth row of the pack and skied the first few kilometres tactically poorly. I managed to move up a few positions from my starting seed but still lost contact with the leaders and had to work quite hard during the race. I felt similarly to my poor race in Sovereign Lake earlier this season. My hips felt stiff and my skating lacked dynamism. I finished 5th among the Senior Men but was dissapointed with my race. I should add that a few of the Junior Men from Ontario are consistently beating us “old guys” in the Senior Men’s category – I hope they continue to ski fast as their training continues in the years ahead! 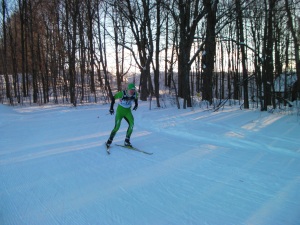 Trying to find some glide on frigid snow.

After three races I was able to visit some good friends in Midland, Ontario for New Year’s  celebrations and I had an absolutely wonderful time sleeping in, playing board games and doing some easy skiing before travelling again. Now I’m at  Soldier Hollow – the site of the 2002 Winter Olympic cross country skiing events and 2014 US National XC Ski Championships. I had a really good race today which has put me another step closer to Sochi – I’ll have stories and photos for you in a day or two! 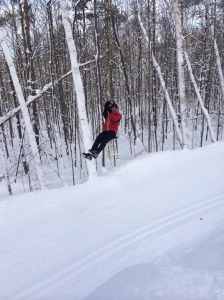 One response to “Ontario Cup”