Immediately after racing at U.S. Nationals in Soldier Hollow I travelled north to Canmore, Alberta. It was fantastic to see the nordic centre under full snow cover as opposed to the skiing I did here in October on Frozen Thunder. There was lots of excitement in the air with a few spots on the Canadian Olympic Team left to be determined. There were two especially exciting sprint races during the week. Racing in Canmore began for me with a 15km classic race.

Trying to ski relaxed as the pain builds. There is nothing quite as satisfying as a good day of classic skiing.

I was very excited to ski this race because I was feeling in excellent shape and this was an opportunity to finish my qualification requirements for Sochi. Race preparations didn’t start well – Petr’s flight was delayed and he arrived into Canmore at 9:30pm the night before the race. The morning of the race we were locked out of our waxing cabin where all my skis and waxes were. We managed to reach our equipment 70 minutes before the race start. From here everything came together, Petr and our friend Tomas once again gave me some of the best skis I have ever had, and I managed to ski the best race of my life scoring 124 FIS points.

It was wonderful to have my friends Josh and Ellen come from Calgary to cheer me on. Josh also took some great photos of me during the classic race. Thanks!

The team at the Canmore Nordic Centre knows how to put on a high level race. Admire the beautiful stadium setup visible here.

Striding up the hill out of the stadium.

After two days rest I took the opportunity to ski the 30km skiathlon. This race began with the exact same 15km classic section which I raced on Thursday, followed by an equipment switch and then a 15km skate section. This is quite a tough race as we essentially skied the same race as Thursday (just a shade slower) and then launched into another 15km race. It was an excellent training opportunity and should make upcoming 15km races feel shorter. 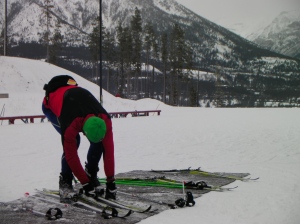 Practicing an equipment transition the day before the skiathlon.

The skiathlon is ideally skied with a “pursuit” boot which features a flexible sole and stiff cuff. Those of us without these ski in skate boots with a stiff sole, leaving the cuff unbuckled until the transition.

Heading out on to the skate portion of the course (with boots now buckled up).

At this point I am waiting for FIS points to be tallied and approved, an Olympic FIS Points list will be published on January 20th, shortly after which I should know if I’ll be asked to join the Irish Olympic Team. It has been satisfying to see all the hard work over the summer come together in the last few races. I believe that I have skied well within the qualification criteria so things are looking good in terms of heading to Sochi but I don’t want to celebrate until everything is official.

Next I’ll be spending a week or more training hard at Highlands Nordic in Ontario so that I’ll be ready to race hard in Sochi if I’m asked to go.