The trip which Petr and I had to make to get to Sochi nearly became an Olympic event all in itself. The trouble began when our official Team Ireland clothing failed to arrive in Austria on time. Then the biggest snowstorm I have ever seen hit southern Austria and parts of Italy. We had to cut training half a day short to escape from the masses of snow falling in the mountains. 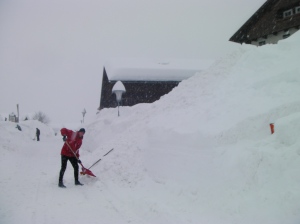 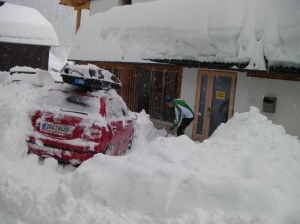 Petr put in a lot of work digging out the car while I was spending lots of time on the phone trying to find our team clothing.

Things in the valley were not much better with trucks parking on the sides of the road making many stretches just a single lane road. We used chains on our descent from Obertilliach but one of them snapped during the trip. We then had to quickly take of the wheel to extract the remenants of chain as they were rattling around inside the wheel but fortunately caused no damage. Unfortunately the only way to get our team clothes was to make a detour to the warehouse where they were. This meant that we had to find accomodation in the town of Villach at midnight. The next morning we had to wake the delivery company owner after he failed to show up at 6:30am as we agreed. Next we made a 7 hour drive to Prague so that we could return Petr’s father’s car.

Relieved to have our bags checked-in in Prague.

From there we flew to Zurich, where we met part of the Irish team and got some rest. In Switzerland things because a lot easier as we boarded a special FIS flight directly to Sochi.

Checking-in in Zurich – to my right are our alpine skiers and team manager – also a former Olympian in alpine skiing.

Petr was delighted with the chocolate we received at check-in!

In Sochi things got a little hectic again with security checks, accreditation procedures, and a shortage of luggage trolleys at the airport. Several bus transfers and gondola ride later we arrived at our accomodation in the Endurance Village. I’ll tell you all about that in my next posting! 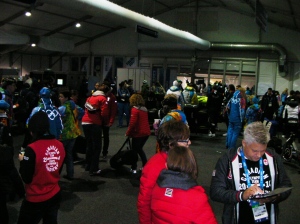 General commotion in the welcome centre. We chatted with some Canadian figure skating staff here before catching our bus. 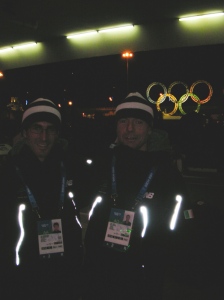 11 responses to “Journey to Sochi”