A unique aspect of the Sochi games is that there are three athletes’ villages. I believe that Vancouver were the first games to have two villages to facilitate transport of athletes to their respective venues. Sochi has a Coastal Village for hockey players, curlers, speedskaters and figure skaters, a Mountain Village for Alpine skiers, snowboarders, sliders (bobsled, luge, skeleton), ski-jumpers, and the oft-forgotten nordic-combiners.  Petr and I are housed in the exclusive (and furthest from Sochi) Endurance Village which is only for cross country skiers, biathletes and their support teams.

Home for the next three weeks. 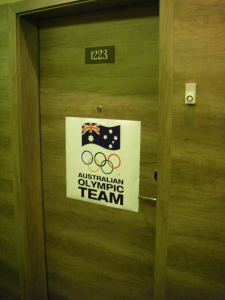 Our neighbours – we haven’t had time to chat yet. 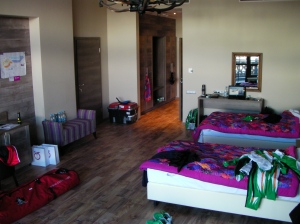 The spectacular view from our room.

The Endurance Village is composed of one enourmous building with rooms, fitness centre, shops, hair salon, swimming pool and dining hall. Generally speaking it is occupied by big teams (Russia, Norway, Sweden and small teams). Middle sized teams  (Canada, Belarus, Switzerland, Czech Republic) live in their own houses around the main building. The main buidling has an extensive network of terraces. A few days ago many teams had still not arrived so running around these deserted terraces felt like being a character in a computer game.

Some parts of the terrace appear heated (or poorly insulated) which keeps them free of snow.

Building 1 is so big that the Norwegians have made up their own direction signs so that they don’t get lost. 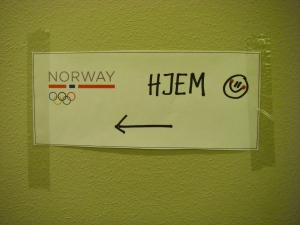 Norways uses one of the halls in front of our room to get home, so we’ve been seeing lots of skiing superstars! 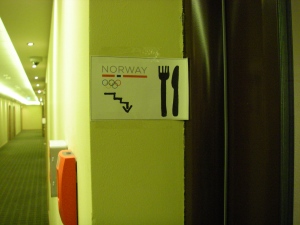 Directions to the most important place in the athletes’ village – the dining hall!

The Irish Pub – unfortunately entirely bereft of beer, patrons or television screens – let’s hope that changes as the games progress. 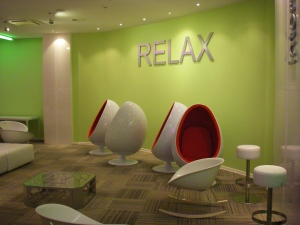 The athlete relaxation area for anyone dealing with pre-race jitters.

Here is an overview of our time in Sochi so far:

Day 2 – Our goal for this day was to get our bibs (athlete bib for me, team captain bib for Petr), a key to our wax cabin, and to ski the race course at a slow pace and calmly on skate skis to get to know it intimately before my race on Feb. 14th.

Our wax cabin labelled twice – this has been corrected and Iran has joined us.

At times I’m not sure if all this is really happening – but now that I’ve been given an athlete’s bib there’s no denying that it is. 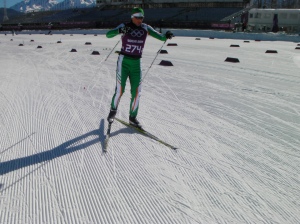 Skiing through the stadium.

In front of the Olympic rings, with beautiful mountains (and the border with Georgia) to the south.

Day 3 – We set up our waxing cabin and gathered a few more supplies from the industry representatives who have huge stockpiles here. Then we tested a few different klisters for the hard abrasive snow and worked on classic technique. 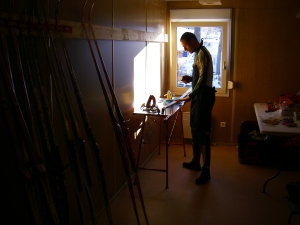 Working on classic technique with one pole, beneath one of the many gondolas which link the Olympic venues.

Day 4 – this morning was a sleep in. Training volume is now reduced as we approach my race. During the day I needed something to do so I got my hair cut at the hair salon here – far too fancy an experience for me to repeat. Petr tested glide waxes in the morning, and was joined by the Iranian team in our wax cabin. In the afternoon we went to the gym for a strength session.

I’d be willing to wager that Petr is the fastest coach here – he was mistaken for an athlete by a TV crew yesterday!

Day 5: Today we’ll be ramping up the intensity on the ski trails, and we’ll be trying to catch Irish snowboarder Seamus O’Connor on television as he completes his slopestyle qualifying runs before the opening ceremonies tomorrow.

Apart from the opening ceremonies tomorrow, I won’t be seeing many new things beyond the Endurance Village and the ski trails before my race (Feb. 14th)  so it may be a while until I post again.

8 responses to “Settling in to Sochi”