Since I last wrote on this blog the 2014 Winter Olympic Games have been declared open! The opening ceremony was a truly spectacular affair and from what I saw the transport of athletes and other logistics ran flawlessly. So many aspects of the night were incredible, but the three moments that stand out for me, and which I will hopefully never forget are: walking into the stadium during the parade of nations, seeing the Olympic flag being hoisted and seeing the Olympic flame paraded around the stadium. Petr designed my training plan so that I could attend the ceremonies and sleep in the next morning, which was necessary as I didn’t get to bed until 1:30am.

Walking with the other endurance athletes toward the gondola station.

After the gondola we took a bus to Sochi. Lots of new infrastructure along the way. 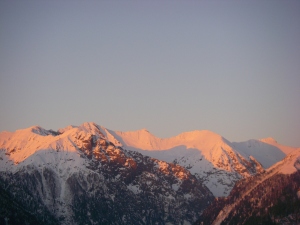 Sunset outside our window.

In the last few days I have learned a few shortcuts in the village, and between the village and the cross country stadium. In many cases it is faster to walk than to take a shuttle bus. 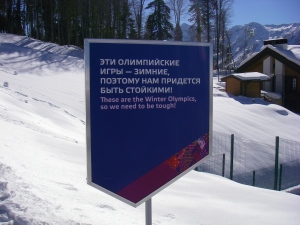 Signs to encourage weary spectators on the walk up to the stadium.

We continue to test waxes and skis every day. Just as we were starting to get a perfect setup, temperatures have warmed and the tracks are starting to get slushy – we’ll see what the next few days bring. The course had to be salted today – a procedure which draws moisture from the snowpack in an attempt to dry and solidify it. Unfortunately there were still more crashes and broken equipment in today’s races then one should expect.

Having some fun with our neighbours in the waxing cabins.

Joining the press during the women’s skiathlon. I need a bigger camera!

Another new experience for me was an anti-doping blood test. I was very impressed with the organisation of the process, the checks in place to prevent mixing up samples, and the medical staff taking the blood. It’s good to know that I can be confident in the process. 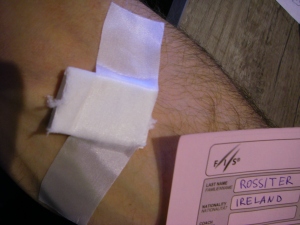 On a lighter note – beyond the sports competitions the main event at the games for the athletes seems to be the trading of national pins. Most nations have given each athlete a small bag of pins to give or trade away. The smaller the team, the rarer the pin – so our Irish pins have been very enthousiastically received. From what I understand the pin to get at these games is the Jamaican one! Personally I’d like to find some from Andorra and Nepal. It’s a project I’ll have to work on after my race.

I’ve also been watching lots of biathlon on television as well as Ireland’s own snowboarding sensation Seamus O’Connor who had a solid day in the halfpipe event today.

One of my last training sessions before race day.

I have a rest day tomorrow, then it will be an pre-race workout on the 13th, and my race on the 14th. For anyone hoping to watch, my start time will be sometime after 2pm Sochi time – I’ll post it on twitter @oldmanJan when I find out.  Internet video streaming is unfortunately different in every country so I don’t have any good recommendations for those of you without a television.