I think I had the perfect Olympic schedule – two weeks of hard work preparing for my race, the race itself, and then a week to enjoy the rest of the games. Because there were so many competitions every day and they are geographically quite spread out, I was almost more tired during the last week of the games than during the first two!

Attending an Olympic competition is spectacular in itself, but knowing someone competing makes it so much more dramatic. After my race I was able to watch my teammates Sean Greenwood compete in skeleton, and Conor Lyne compete in slalom.

Watching skeleton from the finish area. 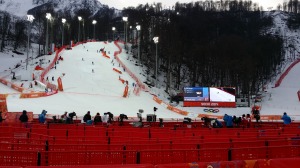 The bottom of the incredibly challenging slalom course.

Our man Conor on the big screen.

After watching my teammates compete I managed to visit the Olympic Park by the coast, the mountain village, attended some hockey games, and watched lots of cross country skiing and biathlon. 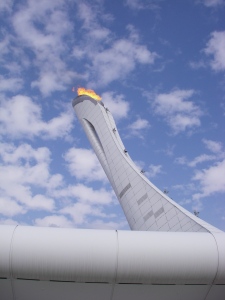 The Olympic flame in the main Olympic Park. 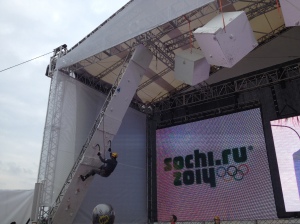 My next Olympic sport? Ice climbing is a demonstration sport at this years games. Unfortunately the real ice was melting.

My friend Tom on the wall showing us all how it’s done. 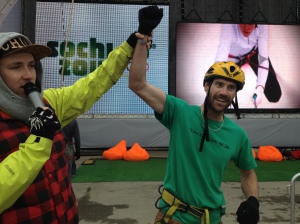 The announcer was thrilled with his performance and declared him a professional. 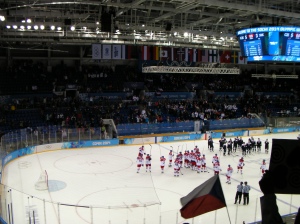 The Czech Republic wins a qualifying match against Slovakia.

The Canadian womend defended their gold medal with a last minute win.

Canada house – not accessible (even to Canadians) without a special VIP pass.

In ran into America’s first individual luge medalist and discovered that we have a friend in common.

The spectacular biathlon stadium – quite possibly the most popular venue of these games.

A very exciting sport for spectators.

Fans of the great (and humble) Ole Einar Bjoerndalen. 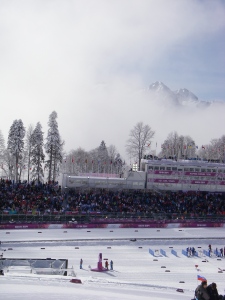 Another beautiful day at the cross country stadium. 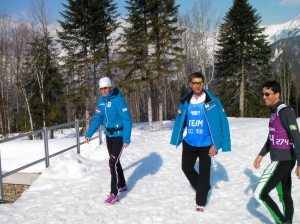 Perfect for watching the races with friends.

Her Czech fans were naturally ecstatic!.

Springtime in the Mountain Village – where Team Ireland was based.

I paid a visit to the athlete village ER. Glad to report that I could operate a Russian ventialator in a pinch – only some text on the screen was in Cyrillic.

After the 50km race, pin trading evolved to trading clothes at the cross country stadium – I managed to barter for these beautiful Finnish hats.

The pitfalls of literal translation.