I am pleased to report that my second weekend of racing in British Columbia was significantly more successful than the first. I heard that some of you were a bit worried about my results from Sovereign Lake – and I can assure you – so was I!

After the races in Sovereign Lake, Petr and I stayed put for a few days and put in some of the best training I’ve done all year. Later in the week we made the 4.5hr drive to Rossland. Our route took us through valleys full of beautiful horses and lots of (somewhat less beautiful) rusting pick-up trucks. We then passed very close to the border with the USA and finally east into the Monashee Mountains.

The Toyota Matrix is a fine car for skiers, and BC is a fine place to travel.
(I have not received any financial or other support from Toyota)

The races were hosted by the Black Jack Ski Club. They cut a brand new 5km trail for the races this summer. They certainly succeeded  in creating a challenging world class trail. There were lots of steep uphills, technical downhills and almost no double poling sections on the course. I was glad to have the opportunity to learn the course on Friday before the weekend of races. I may have inadvertently insulted one of the races organisers, our conversation went a little like this:

Organiser: What did you think of our cliff?

Me: Cliff? –  oh the little drop at the back of the race loop.

Organiser: Well, we call it the cliff…

I didn’t mean to belittle the work they had put into the course. The downhill was certainly impressive – it was a big drop (even bigger than Dirk’s Dive for anyone familiar with that delight at Nakkertok) followed by a sharp left hand turn. My GPS watch showed a maximum speed of 49.9km/h but I’m not sure how accurate that is. I do enjoy dowhills, and I thought this one was manageable if you had practiced it a few times and were able to choose the ideal line with no other skiers on the hill.

Saturday was a skating sprint race. I don’t have much to write about it, as my day was over quickly since I did not move beyond the qualifying round. Unfortunately there wasn’t too much snow on the course, and as it was cut on rocky terrain, my skis took a nasty gash from a stone hidden below the snow – I was not impressed, and unfortunately many skis were damaged this weekend. One positive aspect of the day was that I posted my best ever sprint in terms of FIS points, but still nothing to write  home about (but enough to write about on the internet I suppose…)

On Saturday afternoon Petr skied a 7.5km mass start skate race as part of the Kootenay Cup series. Petr took the lead early on in the race, traded it back to another skier, and then skied strategically to take the lead and the win on the 3rd lap.

Petr Jakl takes the lead out of the stadium.

The medals in this race were chocolate filled!

On Sunday I competed in a 15km individual start classic race. In contrast to Sovereign Lake temperatures rose and snow fell, which left us with soft slippery snow just below freezing. Though we made some last minute adjustments, Petr came up with an excellent wax combination and I had excellent kick on my skis. I really wanted to improve on my previous distance race, and was hoping to head home for Christmas with a solid race result. It was a tough race, but I managed to ski good splits (very similar lap times), my technique definitely deteriorated as fatigue set in but I managed to hang on and scored 184 points, well below the 300 average that I need (the fewer the points the better the result). 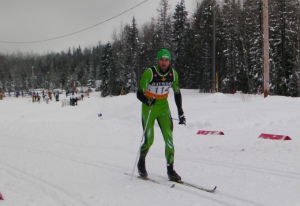 Near the start of the race – I promise I’m not looking at the camera, I’m focusing on the skier ahead of me as the course turns right.

Near the end of the 2nd lap. I’ve cast off my hat (due to the heat), and am making a transition from herringbone to diagonal stride. 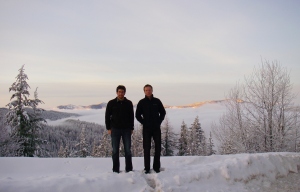 Enjoying the scenery on the drive from Rossland to Kelowna.

Since returning from British Columbia I’ve been training at Highlands Nordic in Ontario. It’s a good place to train because of its long climbs, a microclimate which brings good snow, and its relative proximity to Petr’s home and my parents so that I can be home for Christmas.

There was a local race here today, a 7.5km individual start skate race called the Yuletide Blast. I had an okay race, my offset has come a long way, and I was able to blast up the steep climbs, but my transitions over the tops of the hills and gentle downhill skating are still weak. I won the senior men’s category, which was nice since I haven’t won a race in a while – though lots of the junior men posted faster times so I’ve still got work to do. After the race – in the spirit of more work, I skied two 13min intervals up the main climbs of the course to get my body used to a longer race effort.

Next I’ll take two days to celebrate Christmas and then I’ll be back at Highlands for the first Ontario Cup races of the season. Unfortunately this means two weeks without FIS races, but we’ve planned some good training before starting serious racing again on Jan. 4th with US Nationals (at Soldier Hollow on the Salt Lake City Olympic trails), then Canadian Olympic Trials in Canmore, and some more FIS races in Montana in early January.

Thanks for reading, I hope you are at home surrounded by family and friends – but if you could be skiing right now instead – get outside! Happy Holidays!